Has the Society for Neuroscience lost its way?

The tl;dr version: The Society for Neuroscience (SfN) makes humongous amounts of money from its journal and meetings, but spends very little on helping its members, while treating overseas researchers with indifference bordering on disdain.

I first became concerned about the Society for Neuroscience back in 2010 when I submitted a paper to the Journal of Neuroscience. The instructions to authors explained that there was a submission fee (at the time about $50). Although I 'd never come across such a practice before, I reckoned it was not a large sum, and so went ahead. The Instructions for Authors explained that there was a veto on citation of unpublished work. I wanted to cite a paper of mine that had been ‘accepted in principle’ but needed minor changes, and I explained this in my cover letter. Nevertheless, the paper was desk-rejected because of this violation. A week later, after the other paper was accepted, I updated the manuscript and resubmitted it, but was told that I had to pay another submission fee. I got pretty grumbly at this point, but given that we'd spent a lot of time formatting the paper for J Neuroscience, I continued with the process. We had an awful editor (the Automaton described here), but excellent reviewers, and the paper was ultimately accepted.

But then we were confronted with the publication fee and charges for using colour figures. These were substantial – I can’t remember the details but it was so much that it turned out cheaper for all the authors to join the SfN, which made us eligible for reduced rates on publication fees. So for one year I became a member of the society.

The journal’s current policy on fees can be found here.  Basically, the submission fee is now $140, but this is waived if first and last authors are SfN members (at cost of $200 per annum for full members, going down to $150 for postdocs and $70 for postgrads). The publication fee is $1,260 (for members) and $1,890 for non-members, with an extra $2,965 if you want the paper to be made open access.

There are some reductions for those working in resource-restricted countries, but the sums involved are still high enough to act as a deterrent. I used Web of Science to look at country of origin for Journal of Neuroscience papers since 2014, and there’s no sign that those from resource-restricted countries are taking advantage of the magnanimous offer to reduce publication fees by up to 50%.
The justification given for these fees is that ‘The submission fee covers a portion of the costs associated with peer review’, with the implication that the society is subsidising the other portion of the costs. Yet, when we look at their financial statements (download pdf here), they tell a rather different story. As we can see in the table on p 4, in 2017 the expenses associated with scientific publications came to $4.84 million, whereas the income from this source was $7.09 million.

But maybe the society uses journal income to subsidise other activities that benefit its nearly 36,000 members? That’s a common model in societies I’m involved in. But, no, the same financial report shows that the cost of the annual SfN meeting in 2017 was $9.5 million, but the income was $14.8 million. If we add in other sources of income, such as membership dues, we can start to understand how it is that the net assets of the society increased from $46.6 million in 2016 to $58.7 million in 2017.

This year, SfN has had a new challenge, which is that significant numbers of scientists are being denied visas to attend the annual meeting, as described in this piece by the Canadian Association for Neuroscience. This has led to calls for the annual meeting to be held outside the US in future years. The SfN President has denounced the visa restrictions as a thoroughly bad thing. However, it seems that SfN has not been sympathetic to would-be attendees who joined the society in order to attend the meeting, only to find that they would not be able to do so. I was first alerted to this on Twitter by this tweet: 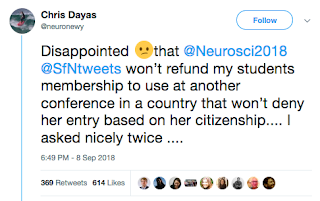 This attracted a fair bit of adverse publicity for SfN, and just over a week later Chris heard back from the Executive Director of SfN who had explained that whereas they could refund registration fees for those who could not attend, they were not willing refund on membership fees. No doubt for an organisation that is sitting on long-term investments of $71.2 million (see table below), the $70 membership fee for a student is chicken feed. But I suspect it doesn’t feel like that to the student, who has probably also incurred costs for submitting an unsuccessful visa application.

There appears to be a mismatch between the lofty ideals described in SfN's mission statement and their behaviour. They seem to have lost their way: instead of being an organisation that exists to promote neuroscience and help their members, the members are rather regarded as nothing but a source of income, which is then stashed away in investments. It’s interesting to see that under Desired Outcomes, the Financial Reserve Strategy section of the mission statement has: ‘Strive to achieve end of year financial results that generate net revenues between $500,000 and $1 million in annual net operating surplus.’ That is reasonable and prudent for a large organisation with employees and property. But SfN is not achieving that goal: they are making considerably more money than their own mission statement recommends.

That money could be put to good use. In particular, given SfN’s stated claim of wanting to support neuroscience globally, they could offer grants for scientists in resource-poor countries to buy equipment, pay for research assistants or attend meetings. Quite small sums could be transformational in such a context. As far as I can see, SfN currently offers a few awards, but some of these are paid for by external donations, and, in relation to their huge reserves, the sums are paltry. My impression is that other, much smaller, societies do far more with limited funds than SfN does with its bloated income.

Maybe I’m missing something. I’m no longer a member of SfN, so it’s hard to judge. Are there SfN members out there who think the society does a good job for its membership?