What is going on in Hindawi special issues?

A guest blogpost by Nick Wise

The Hindawi journal Wireless Communications and Mobile Computing is booming. Until a few years ago they published 100-200 papers a year, however they published 269 papers in 2019, 368 in 2020 and 1,212 in 2021. So far in 2022 they have published 2,429. This growth has been achieved primarily by the creation of special issues, which makes sense. It would be nearly impossible for a journal to increase its publication rate by an order of magnitude in 2 years without outsourcing the massive increase in workload to guest editors.

Recent special issues include ‘Machine Learning Enabled Signal Processing Techniques for Large Scale 5G and 5G Networks’ (182 articles), ‘Explorations in Pattern Recognition and Computer Vision for Industry 4.0’ (244) and ‘Fusion of Big Data Analytics, Machine Learning and Optimization Algorithms for Internet of Things’ (204). Each of these special issues contains as many papers as the journal published in a year until recently. They also contain many papers that are flagged on Pubpeer for irrelevant citations, tortured phrases and surprising choices of corresponding email addresses.

However, I am going to focus on one special issue that is still open for submissions, and so far contains a modest 62 papers: ‘AI-Driven Wireless Energy Harvesting in Massive IoT for 5G and Beyond’, edited by Hamurabi Gamboa Rosales, Danijela Milosevic and Dijana Capeska Bogatinoska. Given the title of the special issue, it is perhaps surprising that only two of the articles contain ‘wireless’ in the title and none contain ‘energy’. The authors of the other papers (or whoever submitted them) appear to have realised that as long as they included the buzzwords ‘AI’, ‘IoT’ (Internet of Things) or ‘5G’ in the title, the paper could be about anything at all. Hence, the special issue contains titles such as:

Of the 62 papers, 60 give Hamurabi Gamboa Rosales as the academic editor and 2 give Danijela Milosevic. Why is the distribution of labour so lopsided? One can imagine an arrangement where the lead editor does the admin of waving through irrelevant papers and the other 2 guest editors get to say that they’ve guest-edited a special issue on their CV.

Of course, in addition to boosting publication numbers for the authors and providing CV points for the guest editors, every paper in the special issue has a references section. Each reference gives someone a citation, another academic brownie point on which careers can be built. An anonymous Pubpeer sleuth has trawled through the references section of every paper in this special issue and found that Malik Bader Alazzam of Amman Arab University in Jordan has been cited 139 times across the 62 papers. The chance that the authors of almost every article would independently decide to cite the same person seems small.

The use and form of the email addresses suggests that all of these papers are the work of a paper mill. It is hard to imagine otherwise how 51 different authors could submit papers to the same special issue using the same institutional email domain and format. Indeed, before 2022 only 2 papers had ever used @masu.edu.cn as a corresponding address according to Dimensions. It is equally hard to imagine how Hamurabi Gamboa Rosales is unaware. How can you not notice that, of the 19 papers you receive for your special issue on the 12th of July, 18 use the same email domain that doesn’t match their affiliation? This may also explain why Hamurabi has dealt with almost all the papers himself. This special issue should be closed for submissions and an investigation begun.

Stepping back from this special issue, this is not an isolated problem. There are at least 40 other papers published in Wireless Communications and Mobile Computing with corresponding emails from Ma’anshan, and Dimensions finds there are 46 in Computational Intelligence and Neuroscience, 38 in Computational and Mathematical Methods in Medicine and 30 in Mobile Information Systems, all published in 2022 and all in Hindawi journals. What are the chances that 18404032@masu.edu.cn is used in a special issue in Computational Intelligence and Neuroscience, 18404038@masu.edu.cn in Disease Markers and 18404041@masu.edu.cn in Wireless Communications and Mobile Computing?

Finally, masu.edu.cn is only one example of a commonly used email domain that doesn’t match the author’s affiliation. It is conceivable that the entire growth in publications of Wireless Communications and Mobile Computing, Computational Intelligence and Neuroscience (163 articles in 2020, 3,079 in 2022) and Computational and Mathematical Methods in Medicine (225 in 2020, 1,488 in 2022) is from paper mills publishing in corrupted special issues.

A desire for clickbait can hinder an academic journal's reputation 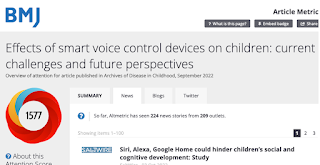 On 28th September, I woke up to look at Twitter and find Pete Etchells fulminating about a piece in the Guardian. 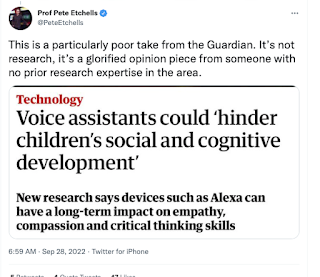 It was particularly galling for him to read a piece that implied research studies had shown that voice-responsive devices were harming children’s development when he and Amy Orben had provided comments to the Science Media Centre that were available to the journalist. They both noted that:

a) This was a Viewpoint piece, not new research

I agreed with Pete’s criticism of the Guardian, but having read the original Viewpoint in the Archives of Disease in Childhood, I had another question, namely, why on earth was a reputable paediatrics journal doing a press release on a flimsy opinion piece written by two junior medics with no track record in the area?

So I wrote to the Editor with my concerns, as follows:

I am writing to enquire why this Viewpoint was sent out to the media under embargo as if it was a substantial piece of new research. I can understand that you might want to publish less formal opinion pieces from time to time, but what I cannot understand is the way this was done to attract maximum publicity by the media.

The two people who commented about it for the Science Media Centre both noted this was an opinion piece with no new evidence, relying mainly on media reports.

Unfortunately, despite this warning, it has been picked up by the mainstream media, where it is presented as ‘new research’, which will no doubt give parents of young children something new to worry about.

I checked out the authors, and found these details:

These confirm that neither has a strong research track record, or any evidence of expertise in the topic of the Viewpoint. I can only assume that ADC is desperate for publicity at any cost, regardless of scientific evidence or impact on the public.

As an Honorary Fellow of the Royal College of Paediatrics and Child Health, and someone who has previously published in ADC, I am very disappointed to see the journal sink so low.

Yesterday I got a reply that did nothing to address my concerns. Here’s what the editor, Nick Brown*, said (in italic), with my reactions added:

Thank you for making contact . My response reflects the thoughts of both the BMJ media and publication departments

Given my reactions, below, this is more worrying than reassuring. It would be preferable to have heard that there had been some debate as to the wisdom of promoting this article to the press.

It is a key role of a scientific journal to raise awareness of, and stimulate debate on, live and emerging issues. Voice control devices are becoming increasingly common and their impact on children's development is a legitimate topic of discussion.

I have no quarrel with the idea that impact of voice control devices on children is a legitimate topic for the journal. But I wonder about how far its role is ‘raising awareness of, and stimulating debate’ when the topic is one on which we have very little evidence. A scientific journal might be expected to provide a balanced account of evidence, whereas the Viewpoint presented one side of the ‘debate’, mainly using anecdotes. I doubt it would have been published if it had concluded that there was no negative impact of voice control devices.

Opinion pieces are part of a very wide range of content that is selected for press release from among BMJ's portfolio of journals. They are subject to internal review in line with BMJ journals´overall editorial policy: the process (intentionally) doesn't discriminate against authors who don't have a strong research track record in a particular field

I’ve been checking up on how frequently ADC promotes an article for press release. This information can be obtained here. This year, they have published 219 papers, of which three other articles have merited a press release: an analysis of survey data on weight loss (July), a research definition of Long Covid in children (February) and a data-based analysis of promotional claims about baby food (February). Many of the papers that were not press-released are highly topical and of general interest – a quick scan found papers on vaping, monkey pox, transgender adolescents, unaccompanied minors as asylum seekers, as well as many papers relating to Covid. It’s frankly baffling why a weakly evidenced viewpoint on a topic with little evidence was selected as meriting special treatment with a press release.

As for the press release pathway itself, all potential pieces are sent out under embargo, irrespective of article type. This maximises the chances of balanced coverage: an embargo period enables journalists to contact the authors with any queries and to contact other relevant parties for comment.

My wording may have been clumsy here and led to misunderstanding. My concern was more with the fact that the paper was press-released, which is, as established above, highly unusual, rather than with the embargo.

The press release clearly stated (3 times) this article was a viewpoint and not new research, and that it hadn't been externally peer reviewed. We also always include a direct URL link to the article in question in our press releases so that journalists can read the content in full for themselves.

I agree that the press release included these details, and indeed, had journalists consulted the Science Media Centre’s commentaries, the lack of peer review and data would have been evident. But nevertheless, it’s well-known that (a) journalists seldom read original sources, and (b) some of the less reputable newspapers are looking for  clickbait, so why provide them with the opportunity for sensationalising journal content?

While we do all we can to ensure that journalists cover our content responsibly, we aren't responsible for the manner in which they choose to do so.

I agree that part of the blame for the media coverage lies with journalists. But I think the journal must bear some responsibility for the media uptake of the article. It’s a reasonable assumption that if a reputable journal issues a press release, it’s because the article in question is important and provides novel information from recognised experts in the field. It is unfortunate that that assumption was not justified in that case.

I just checked to see how far the media interest in the story had developed. The Guardian, confronted with criticism, changed the lede to say “Researchers suggest”, rather than “New research says”, but the genie was well out of the bottle by that time. The paper has an Altmetric ‘attention’ score of 1577, and been picked up by 209 news outlets. There’s no indication that the article has “stimulated debate”. Rather it has been interpreted as providing a warning about a new danger facing children. The headlines, which can be found here, are variants of:

“Voice-control devices may have an impact on children’s social, emotional development: Study”

“According to a study, voice-controlled electronic aides can impair children’s development”

“Why Alexa and Siri may damage kids’ social and emotional development”

“Alexa, Siri, and Other Voice Assistants could negatively rewire your child’s brain”

“Experts warn using Alexa and Siri may be bad for children”

“Are Alexa and Siri making our children DUMB?”

And most alarmingly, from the Sun:

Maybe the journal’s press office regards that as a success. I think it’s a disaster for the journal’s reputation as a serious academic journal.

*Not the sleuth Nick Brown. Another one.

Posted by deevybee at 11:35 No comments: