Desperate marketing from Journal of Neuroscience 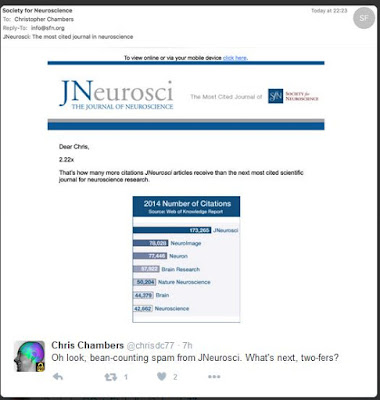 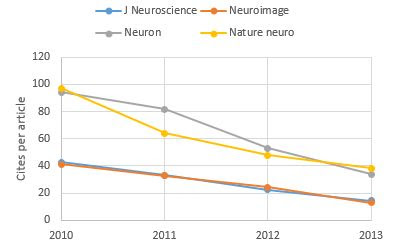 So does this mean, as implied by the Journal of Neuroscience marketing, that authors should preferentially send their papers to Neuron or Nature Neuroscience, because this will lead to them being more highly cited? The answer is almost certainly no. I took at quick look at the most highly cited papers in these four journals, and some common themes occurred. If you want to be highly cited, you should write a paper that is either (a) a review of the field or (b) reports a methodological advance. And the reviews, which I suspect are mostly commissioned, are by famous people. Furthermore, my impression was that empirical papers on molecular neuroscience were more highly cited than those on cognitive neuroscience – I leave that for someone even more nerdy than me to confirm.
My advice to any academic who wants people to notice their work is to do sound, reproducible science on an important topic and publish it promptly, rather than wasting months or years trying to get it into high impact journals. The prestige of the journal you publish in may impress some people, but it won’t magically transform a poor study into a good one. And if your work is good enough, people who care about the subject matter will read, and cite, it, regardless of where it is published.