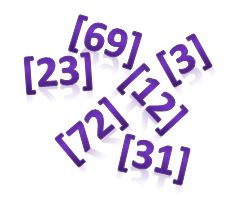 Well, I had not planned a blogpost this morning, but I am goaded to do so by growing frustration as I attempted to read a review that was published in Trends in Neurosciences. The authors were proposing a novel theory in a controversial area, and came out with definitive statements, such as “Imaging studies have revealed the involvement of brain regions including the basal ganglia and cerebellum”. Quite appropriately, they supported such assertions with references. But the journal format meant that these references were identified only by numbers, so I had to flip to the reference list at the back of the paper to find out what was being referred to. The paper had over 70 references, and in the course of reading it, I reckon I did this about 20 times. I would have done it more, but it was distracting and I had to put down my mug of tea each time while I hunted for the relevant page. If I forgot the number on the way (a not unusual occurrence at my age), I had to go through this loop again.

Needless to say, TINS is not alone in adopting this referencing format: it is especially common in journals that have strict length limits on papers. I recently had a paper accepted for such a journal, and I found that any mention of the authors of a referenced work was frowned upon, and I was required to rewrite so that the only identifier of a reference was the number.This often meant turning a short active sentence (Jones [54] showed that.X..) into a longer passive one ( X was found by another study ... [54]).

Why does this matter? Well, if the reader knows the topic pretty well, the referencing will indicate whether the author knows the relevant literature and whether the evidence that is cited is balanced or involves cherrypicking. References also give clues as to where to allocate one's attention. If I see a set of statements associated with a list of familiar names,  I can read more casually because I already know the subject matter; if there is reference to novel material, I’ll focus in more depth. Maybe this is just an obsessive tendency in me, but I want to know what is being referred to, and I find that numbered referencing impairs the readability of an article. Journals may save a bit of space by using numbers rather than names, but as more and more articles move to on-line only, this is not a major consideration, and what is gained in space is at the expense of the reader experience. Hrrmph!

P.S. 13.52 5/4/13
Thanks to Neil Martin (@ThatNeilMartin) for drawing my attention to this v. relevant article. Might explain why psychology journals, whose editors understand how cognition works, tend to prefer the non-numbered system.
Clauss, M., Müller, D., & Codron, D. (2013). Source References and the Scientist's Mind-Map: Harvard vs. Vancouver Style Journal of Scholarly Publishing, 44 (3), 274-282 DOI: 10.3138/jsp.44.3.005
Copy of the article available from the 1st author: mclauss@vetclinics.uzh.ch
Posted by deevybee at 09:03