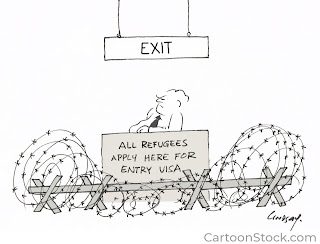 I followed the COP summit in Glasgow with interest, particularly via Channel 4 News, which is good at reporting minority voices. There were incredibly powerful speeches by people whose homes are going to be uninhabitable if we exceed 1.5 degrees warming - and indeed by some for whom extreme weather has already caused famine. For examples see speeches by Elizabeth Wathuti, youth climate activist from Kenya, Mia Mottley, Prime Minister of Barbados, and the interview with Shauna Aminath, minister of environment for the Maldives, and Seve Paeniu, Tuvalu’s minister for finance and climate change.

The plan at COP seemed to focus on decelerating warming in order to, as far as possible, prevent this happening. But it's pretty clear that, even in the unlikely event that we hold warming to 1.5 degrees, there will be enormous numbers of people who will become climate refugees. People don't want to be forced out of their homes. It makes far more sense to adopt strategies that will avoid that than to plan for mass migrations. But sadly, human beings have a habit of not believing the worse until it is upon them. So I think we're going to have mass migrations and I'm worried nobody seems to be planning for that.

The reaction of many wealthy countries to refugees has been to keep them out at all costs and hope they go away. People fleeing their homelands are regarded like toxic waste: a problem to be exported. That pretty much sums up the attitude of the current UK government, who have at various times suggested that asylum seekers be sent to Ascension Island, confined on ship hulks  and, most recently, and to the surprise of the Albanians, sent to Albania. But this problem is not going to go away. We will see increasing numbers of people roaming around desperately trying to find somewhere to live. Quite apart from the humanitarian disaster for the refugees themselves, this will create social unrest and conflict for those in wealthy countries unless it is planned for. Germany has shown that it is possible to integrate large numbers of refugees, and that they can contribute positively to a society if given support.

So, as well as anticipating the impacts of global heating on the physical environment, we need to be planning for mass migrations of people who have lost their homeland. We will need a global strategy, where everyone plays their part. And it should be those countries who are are doing least to curb global emissions who should step up to play their part in taking in refugees.

So I suggest that the next COP summit should aim for a more direct linkage between emissions generated and responsibility for refugees: the more you emit, the more you have to commit to giving citizenship to those who have been rendered homeless by climate change. Note I am saying citizenship, not temporary accommodation in a tent in the desert (or a ship hulk for that matter).

Heads of state who genuinely don't believe that things are that bad, and that it's okay to continue to generate emissions, will find this an easy commitment to make, as it would only kick in when a homeland has become uninhabitable; it should be possible to devise a formal criterion for this: e.g. the place is under water, or experiencing temperatures of 40 degrees or more over a sustained period.

Take, for example, Australia, whose PM, Scott Morrison, tries to blag his way out of a crisis and thinks it's fine to continue mining and exporting fossil fuels. It's ironic that Australia's solution to refugees has previously been to send them off to be imprisoned on a Pacific Island. That sort of solution may no longer be available in future, as Nauru succumbs to rising sea levels.

Given the major role that Australia has played in causing global warming, wouldn't it make sense if at the next COP it was required to step up to its responsibilities and undertake to award citizenship to Pacific Islanders whose homes will be submerged in a few decades? The greater the emissions, the higher the quota of people. And who knows, if it were put to them like that, they might even start taking the phasing out of fossil fuels more seriously?