PEPIOPs – prolific editors who publish in their own publications

I recently reported on a method for identifying authors who contribute an unusually high proportion of papers to a specific journal. As I noted in my previous blogpost, one cannot assume any wrongdoing just on the grounds of a high publication rate, but when there is a close link between the author in question and the journal's editor, then this raises concerns about preferential treatment and integrity of the peer review process.

In running my analyses, I also found some cases where there wasn't just a close link between the most prolific author in a journal and the editor: they were one and the same person! At around the time I was unearthing these results, Elisabeth Bik tweeted to ask if anyone had examples of editors publishing in their own journals. I realised the analysis scripts I had developed for the 'percent by most prolific' analysis could be readily adapted to look at this question, and so I analysed journals in the broad domain of psychology and behavioural science from six publishers: Springer Nature, Wiley, Taylor and Francis, Sage, Elsevier and American Psychological Association (APA). I focused on those responsible for editorial decisions – typically termed Editor-in-Chief or Associate Editor. Sometimes this was hard to judge: in general, I included 'Deputy editors' with 'Editors-in-Chief' if they were very few in number. I ignored members of editorial boards.

Before reporting the findings, I thought I should consult more widely about whether people think it is appropriate for an editor to publish in their own journal.

As a starting point, I looked at guidelines that the Committee on Publication Ethics (COPE) has provided for editors

Can editors publish in their own journal?
While you should not be denied the ability to publish in your own journal, you must take extra precautions not to exploit your position or to create an impression of impropriety. Your journal must have a procedure for handling submissions from editors or members of the editorial board that will ensure that the peer review is handled independently of the author/editor. We also recommend that you describe the process in a commentary or similar note once the paper is published.


They link to a case report that notes how this issue can be particularly problematic if the journal is in a narrow field with few publication outlets, and the author is likely to be identifiable even if blinding is adopted.

I thought that it would be interesting to see what the broader academic community thought about this. In a Twitter poll I asked specifically about Editors-in-Chief: 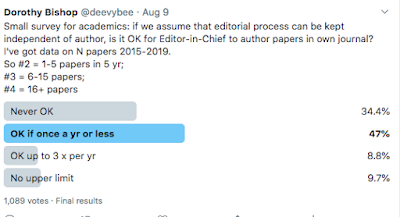 The modal response was that it was OK for an Editor-in-Chief to publish in their own journal at a modest rate (once a year or less). There was general disapproval of editors publishing prolifically in their own journals – even though I emphasised that I was referring to situations where the editorial process was kept independent of the author, as recommended by COPE.

My poll question was not perfectly phrased - I did not specify the type of article: it is usual, for instance, for an editor to write editorials! But I later clarified that I meant regular articles and reviews, and I think most people interpreted it in that way.

The poll provoked some useful debate among those who approved and disapproved of editors publishing in their own journals.

Let's start with some of the reasons against this practice. I should lay my cards on the table and state that personally I am in agreement with Antonia Hamilton, who tweeted to say that as Editor in Chief of the Quarterly Journal of Experimental Psychology she would not be submitting papers from her lab to that journal during her term of office, citing concerns about Conflict of Interest. When I was Editor-in-Chief of Journal of Child Psychology and Psychiatry, I felt the same: I was concerned that my editorial colleagues would be put in a difficult position if they had to handle one of my papers, and if my papers were accepted, then it might be seen as involving a biased decision, even if it that was not the case. Chris Chambers, who was among the 34% who thought an Editor-in-Chief should never publish in their own journal, expressed concerns about breaches of confidentiality, given that the Editor-in-Chief would be able to access identities of reviewers. Others, though, questioned whether that was the case at all journals.

Turning to those who thought it was acceptable for an Editor-in-Chief to publish in their own journal, several people argued that it would be unfair, not just on the editor themselves, but also on members of their research group, if presence of an editorial co-author meant they could not submit to the journal. How much of an issue this is will depend, of course, on how big your research group is, and what other publication outlets are available.  Several people felt there was a big difference between cases where the editor was lead author, and those where they played a more minor role. The extreme case is when an editor is a member of a large research consortium led by someone else. It would seem unduly restrictive to debar a paper by a consortium of 100 researchers just because one of them was the Editor in Chief of the journal. It is worth remembering too that, while being a journal editor is a prestigious role, it is hard work, and publishers may be concerned that it becomes a seriously unattractive option if a major outlet for papers is suddenly off-limits.

Be this as it may, the impression from the Twitter poll was that three papers or more per annum starts to look excessive. In my analysis, shown here I found several journals where the Editor-in-Chief had coauthored 15 or more articles (excluding editorials/commentaries) in their own journal between 2015 and 2019.  I refer to these as PEPIOPs (prolific editors who publish in their own publications). For transparency, I've made my methods and results available, so that others can extend the analysis if they wish to do so: see https://github.com/oscci/Bibliometric_analyses. More legible versions of the tables are also available.

Table 1 shows the number of journals with a PEPIOP, according to publisher.
The table makes it clear that it is relatively rare for an Editor-in-Chief to be a PEPIOP: there were no cases for APA journals, and the highest number was 5.6% for Elsevier journals. Note that there are big differences between publishers in terms of how common it is for any author to publish 15+ papers in the journal over 5 years: this was true for around 25% of the Elsevier and Springer journals, and much less common for Sage, APA and Taylor & Francis. This probably  reflects the subject matter of the journals - prolific publication, often on multiauthored papers, is more common in biosciences than social sciences.

Individual PEPIOPs are shown in Table 2. An asterisk denotes and Editor-in-Chief who authored more articles in the journal than any other person between 2015-2019.

These numbers should be treated with caution – I did not check whether any of these editors had only recently adopted the editorial role - largely because this information is not easy to find from journal websites*. I looked at a small sample of papers from individual PEPIOPs to see if there was anything I had overlooked, but I haven't checked every article - as there a great many of them.  There was one case where this revealed misclassification: the editor of Journal of Paediatrics and Child Health wrote regular short commentaries of around 800 words summarising other papers: this seems an entirely unremarkable thing for an editor to do, but they were classified by Web of Science as 'articles' which led to him being categorised as a PEPIOP.  This illustrates how bibliometrics can be misleading.
In general I did not find any ready explanation for highly prolific outputs.  And I where I did spot checks I found only one case where there was an explanatory note of the kind COPE recommended (in the journal Maturitas) - on the contrary, in many cases there was a statement confirming no conflict of interest for any of the authors. Sometimes there were lists of conflicts relating to commercial aspects, but it was clear that authors did not regard their editorial role as posing a conflict. It was also worth mentioning there were cases where an Editor-in-Chief was senior author.

The more I have pondered this, the more I realise that the reason why I am concerned particularly by Editor-in-Chief PEPIOPs is because this is the person who is ultimately responsible for integrity of the publication process. Although publishers increasingly are alert to issues of research integrity, journal websites typically advise readers to contact the Editor-in-Chief if there is a problem. Complaints about editorial decisions, demands for retractions, or concerns about potential fraud or malpractice all come to the Editor-in-Chief. That's fine provided the Editor-in-Chief is a pillar of respectability. The problem is that not all editors are the paragons that we'd like them to be: one can adopt rather a jaundiced view after encountering editors who don't even bother to reply to expressions of concern, or adopt a secretive or dismissive attitude if plausible problems in their journal are flagged up. And there are also cases on record where an editor has abused the power of their position to enhance their own publication record. For this reason, I would strongly advise any Editor-in-Chief not to be a PEPIOP; it just looks bad, even if a robust, independent editorial process has been followed. We need to have confidence and trust in those who act as gatekeepers to journals.

My principal suggestion is that publishers could improve their record for integrity if they went beyond just endorsing COPE guidelines and started to actively check whether those guidelines are adhered to.

*Note: 21st Aug 2020: A commenter on this blogpost has noted that Helai Huang fits this category - this editor has only been in post since 1 Jan 2020, so the period of prolific publication predated being an editor-in-chief.
Posted by deevybee at 14:58