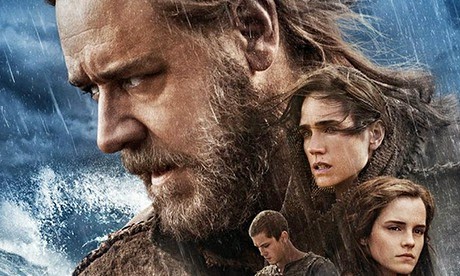 I don't do long haul flights much. They wreck my frontal lobe function and leave me not only with a headache, but with a sense of befuddlement that can take a few days to abate. I also find that if I try to while away the time with work, or read a book, it just makes matters worse, so I am reduced to watching the films. And now at 32,000 feet en rpute to New York, I can think of nothing better to pass the time than to write a review of the film I have just seen, Noah.

I grew up enjoying epics such as the Ten Commandments (with memorable plague of frogs and parting of Red Sea), Samson and Delilah (where, according to one review "Victor Mature fits neatly into the role of the handsome but dumb hulk of muscle")  and the Last Days of Sodom and Gomorrah (this trailer tells you all you need to know). I expected something similar – an attempt at telling a Biblical story through film, but with use of CGI to create better special effects.  But this was more like a bizarre mix of Lord of the Rings, Harry Potter and Pirates of the Caribbean, with a touch of Eastenders thrown in. Although I jotted down occasional notes as I viewed it, this is my reconstruction from memory and so accuracy is not guaranteed, especially given the befuddled state in which I watched.

So at the start we have Noah's father wandering around a barren landscape with his son. We know he is a goodie because a wounded beast comes scampering into view, and although it is of ferocious appearance, Noah's dad approaches it and speaks gently to it and attempts to deal with its wounds. However, a band of evil men then appear. We know they are evil because they have shot the animal and explain that they intend to eat it, on the grounds that 'The Creator' (the word 'God' is never used, interestingly) has not provided adequately for them, and so they need to eat meat. Noah's dad disapproves and so they bump him off, while Noah looks on in horror. Flash forward, then to the next generation, where Noah and his wife and children are wandering the same dismal landscape. It's not clear what they live on, since they disapprove of eating animals, and there's no vegetation to be seen. They also have quite respectable, if drab, clothes, and one wonders how these were achieved, if animal skins are verboten.

However, one really does not need to worry too much about plausibility because it becomes clear that supernatural forces are at play. Noah communicates with the Creator through dreams in which he is under water surrounded by drowning creatures. He decides to consult his grandad, Methusalah (Anthony Hopkins as a cross between Sauron, Obi Wan Kenobe and a hobo), who lives alone in a quarry, apparently not doing much but just waiting to be consulted.

On the way there (or possibly the way back) the family find a place littered with bodies, from which they rescue a small girl who is wounded. Marauding hordes, very reminiscent of Orcs or whatever the marauding things in Lord of the Rings are, attack them and they seem doomed, but escape into an area that everyone fears to enter. This is because it is controlled by a group of giant monsters who look like cookie monsters  that have spent too long in the microwave. These quell the marauding hordes, but spare Noah and his family. Here the plot goes a bit awry. The cookie monsters are 'the Watchers' and seem to be angels who were cast out of Heaven at the time of the Fall. If I got it right (the drinks trolley turned up around this time and I was a bit distracted) they were cast out because they wanted to protect humanity, incurring the wrath of the Creator who was utterly disaffected with humanity after Eve chomped at the forbidden fruit. Nevertheless, they approve of Noah because he wants to do the bidding of the Creator. Slight logical disconnect there, I think, but hey, they're only cookie monsters.

Fast forward a few more years, and Emma Watson pops up. This was very confusing, because her behaviour and reactions were exactly as in the Harry Potter movies, in that she spent a lot of time chasing after the boys trying to get them to behave sensibly. One of them, Shem, looks like the one in Pirates of the Caribbean who isn't Jack Sparrow (rather a shame that Jack Sparrow himself didn't feature, especially once the ark got waterborne, when he could have come in handy). He fancies Hermione, which is hardly surprising, as she is the only female around apart from his mother. However, there is a problem. Hermione is barren because of the injuries she suffered as a child. Everyone seems to know this as a given fact, though one might have thought that a bit of tentative exploratory sex would have been worth a try. Brother number two, who, perhaps as a joke in this vegetarian family, is named Ham, is jealous that he hasn't got a woman.

Somewhere along the way Noah has another consultation with Methuselah and decides that the earth is going to be destroyed by the Creator because of man's wickedness, and that what is needed is an ark. He doesn't have much of a clue about design, because what he ends up with is a giant wooden portakabin which doesn't seem to have a hull. This could be a consequence of enlisting the help of the cookie monsters, whose intellectual powers seem quite limited. But the birds are impressed, and start flocking in. The previous evening I'd watched a documentary about penguins, and so the thought uppermost in my mind was that the ark would have had a massive problem with poo – certainly even a pair of penguins would be capable of creating a substantial problem if the documentary was to be believed. However, here the script-writer had a moment of genius – Noah's wife fumigated the ark with a substance that sent all animals to sleep – except humans.

Somewhere about this point, Russell Crowe confused us all acquiring a number one clipper and trimming his hair and beard. I initially thought he was a new villain, and only recognised him when he put his hoodie back on. Ham also seemed to have access to the clipper and remained clean shaven with a short haircut throughout, whereas Shem had flowing locks and a beard, albeit a tidy one. The state of the men's grooming was a dead giveaway to their ethical status in the film, as became apparent when, in a genius piece of casting, Ray Winstone suddenly cropped up as Cain, with very unkempt hair and beard, a band of evil followers, and a cockney accent.  For reasons hard to fathom, Cain wanted to enlist Ham, but Noah wasn't having any of that, so Cain settled for establishing a camp near to the ark. This was rather spectacularly filmed to resemble a scene of hell by Hieronymous Bosch, but without the giant ears, with was much screeching and wailing, indicative of the sorry state of social mores. Cain did however groom his beard into two birfurcated points, perhaps suggesting some attempt to reform.

Noah's wife realises that the ark plan has a fatal flaw, which is a shortage of fertile women. Off she goes to consult Methuselah, who emerges from his quarry to track down Hermione, and perform an instant gynaecological miracle with his magic touch. This is followed almost immediately by her indulging in wild passionate sex with Shem (hinted at, as this is a film suitable for children). Ham, meanwhile, has gone into Cain's encampment to find a woman.  However, no sooner has he done so when Cain instigates an uprising to attack and take over the ark, and in the course of this, Ham's woman is killed. Somehow, Cain has invented a form of bazooka gun, which proves effective against the cookie monsters, who die in a spectacular blaze of fireworks before ascending to heaven, apparently now forgiven by the Creator.

I was rather disappointed by the rain. I had expected lots of it, but what was shown seemed rather pathetic when compared to the floods in the UK earlier this year. Instead, though, we had great geysers of water shooting up out of the ground – a bit like a supercharged version of the fountains at Heathrow's terminal  5 – plus the odd tsunami.  In any case, the Creator achieved his aim of drowning everyone except those on the ark, which remarkably, floated upright despite its unpromising design. Unbeknown to Noah, however, Cain had managed to stow away on the ark, where he proceeded to demonstrate how utterly evil he was by eating the odd animal. He enlisted the help of Ham, who was especially cross with Noah for failing to rescue the woman he had found in a ditch.

Meanwhile, Noah was becoming increasingly deranged. He had decided that the whole point of the exercise was to save the animals but rid the world of man, because man would only despoil the planet again if allowed to live. It was therefore imperative that no new humans should be born. This was problematic because Hermione was pregnant. Now, if your father had just told you that he was enacting God's will to exterminate the human race, and you found that your wife was pregnant, what would you do? Well, Shem thought it a good idea to go and ask for his blessing. Bad move. Noah isn't having any of it: "If you bear a girl, in the moment of her birth I will cut her down" (Yup, this is verbatim dialogue). In fact, Hermione, as one might have anticipated, outperforms and delivers twin girls. Shem has decided to kill Noah to save his babies, around the same time that Cain has decided to kill him, saying "Your ark, your beasts and your women are all mine. I will build a new world in my image." Cain has also enlisted Ham as backup assassin. You would have thought that with these odds, Noah's fate would be sealed, but somehow in a confusing fight scene in which everyone dived in, Cain ended up dead and Noah very much alive and still hell-bent on killing the twins. But, guess what, when it came to it, he was unable to carry out the act. And at that point a dove landed on the ark with a twig in its beak, and everyone cheered up.

That was about it. They landed somewhere that looked like Scotland and settled down, and after a brief period of depression and drunkenness, Noah re-established good relations with his family, except for Ham, who wandered off into the wilderness, perhaps hoping to find a female survivor of the flood.

The weirdest part of all this was that although I found the whole thing hilarious, I felt offended by the film on behalf of religious people. It is a little known fact about me that in my teenage years I was a Sunday School teacher - and so I have an extensive if rusty knowledge of the Bible.  I found myself getting especially cross about the cookie monsters, thinking that it was a travesty of the Bible story to introduce all this supernatural stuff. And then I realised what a ridiculous thought that was.
Posted by deevybee at 11:32