So the time has come round for the announcement of the 2011 Orwellian Prize. The prize is given for an article in an English-language national newspaper that achieves an unusually high level of inaccuracy. Only articles that describe a piece of published scientific research are eligible. Points are given for every statement in the article that does not match the original source, as follows:
Last year, I got two nominations, but, as described here, neither adequately met the criteria. This year, I’ve had just one nomination, from Neurobonkers, but it’s set a standard for inaccuracy that will be hard to beat. The article that I first selected in 2010 to illustrate the scoring system scored 16 points. This one achieves a startling 23 points. The source article by Kucewicz et al (2011) can be found here. Here is a screenshot of the account in the Daily Mail, with errors marked in red (3 points), orange (2 points) and blue (1 point). 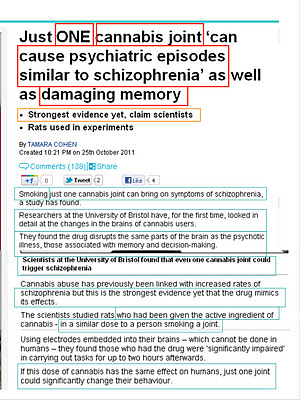 There is a detailed analysis of errors in this blogpost by Neurobonkers, which I urge you to look at. Suffice it to say,  the academic paper is not about cannabis, smoking or schizophrenia. Rather it is about an artificial compound that is not present in cannabis, which was injected into rats, and which led to changes in their brain waves.

There were some complaints to the Press Complaints Commission, and presumably in response to this, the article was modified. The headline, which originally read Just ONE cannabis joint 'can bring on schizophrenia' as well as damaging memory was altered to Just ONE cannabis joint 'can cause psychiatric episodes similar to schizophrenia' as well as damaging memory. Perhaps even the Daily Mail found the notion of a schizophrenic rat implausible. But the rest of the article remains, as a scare story about cannabis. And here is what makes this article such a prime candidate for the Orwellian Award: this is not about a hyped press release by a university, or misunderstanding of complex science. It's not even about sensationalising a scientific finding to draw readers in. No, this is about using a scientific paper as a prop in the Daily Mail's anti-cannabis campaign. A ploy that the newspaper has previously used in another ideological battle, on climate change. When reporting research, no respect is given to the truth: scientists are simply used to bolster a preconceived opinion, and if they don't do that, their findings are distorted.

Twelve of this article's 23 points came from the headline. Journalists don’t write the headlines. They therefore dislike my scoring system because it penalises errors in headlines more than errors in the body of the text. My view is that it’s the headlines that count for most: far more people will read the headline than the text, and for many readers it's the only part of the article they will process. It’s important that it's accurate. Although few would defend frank lying, some editors seem to think it doesn’t matter if a headline is hyperbolic, provided it sells the paper or gets someone to read further. This very issue has been a topic of debate in the recent Leveson Inquiry into culture, practice and ethics in the UK media. I feel strongly that it's a cop-out to just wash one's hands of it and blame anonymous sub-editors for misleading headlines. I shall therefore continue to award points in proportion to the prominence of the material. But I appreciate it’s not then fair to make the award to the journalist. Indeed, given the Mail's agenda on cannabis, the journalist in this case may well have been under duress to write a scare story.   I will accordingly be making the award to Paul Dacre, Editor of the Daily Mail. I will be happy also to send the token of appreciation for the nomination to Neurobonkers if he/she is willing to email me to tell me where to send it.

I'm pleased not to have had more nominations this year: it suggests that, despite all the grumblings about science journalism, the field is in rude health. I've certainly read a lot of good science reportage in our national newspapers, and where articles have made me angry, it's often because of hype by a press office or scientist, rather than distortion by the press. There are, however, still a few topics, among them drugs policy, where the political stakes are high and scientific reporting is cynically exploited to support an otherwise weak argument.

Coming up with an award certificate and item turns out to be an excellent way of avoiding doing serious work.....