The X and Y of sex differences 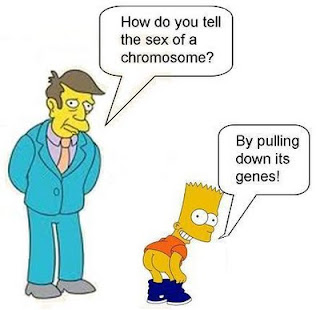 Why and how are men and women different? My interest in this topic is fuelled by my research on neurodevelopmental disorders of language and literacy that typically are much more common in males than females. In this post, I am ranging far from my comfort zone in psychology to discuss what we know from a genetic perspective. My inspiration was a review in Trends in Genetics by Wijchers and Festenstein called “Epigenetic regulation of autosomal gene expression by sex chromosomes”. Despite the authors' sterling efforts to explain the topic clearly, I suspect their paper will be incomprehensible to those without a background in genetics, so I'll summarise the main points - with apologies to the authors if I over-simplify or mislead. 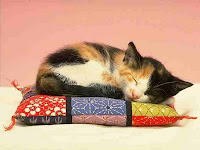 •    In females, only one X chromosome is active. The other is inactivated early in development by a process called methylation. This leads to the DNA being formed into a tight package (heterochromatin), so genes from this chromosome do not get expressed. X-inactivation randomly affects one member of the X-chromosome pair early in embryonic development, and all cells formed by division of an original cell will have the same activation status. The patches of orange and black fur on a calico cat arise when a female has different versions of a gene for coat colour on the two X chromosomes, so patches of orange and black fur occur at random.
•    In both X and Y chromosomes, there is a region at the tip of the chromosome called the pseudoautosomal region, which behaves like an autosome, i.e., it contains homologous genes on X and Y chromosomes, which are not inactivated, and which recombine during the formation of sperm and eggs.
•    In addition, a proportion of genes on the X chromosome (estimated around 20%) escape X-inactivation, despite being outside the pseudoautosomal region.

These basic facts are summarised in Figure 1. Genes are symbolised by red dots, grey shading denotes an inactivated region, and yellow is the pseudoautosomal region.

Note that because (a) the male Y chromosome has few genes on it and (b) one X chromosome is largely inactivated in females, normal males (XY) and females (XX) are quite similar in terms of sex chromosome function: i.e., most of the genes that are expressed will come from a single active X chromosome.
Studies of mice and other species have, however, demonstrated differences in gene expression between males and females, and these affect tissues other than the sex organs, including the brain. Most of these sex differences are small, and it is usually assumed that they are the result of hormonal influences. Thus the causal chain would be that SRY causes the testes to develop, the testes generate male hormones, and those hormones affect how genes are expressed throughout the body.

You can do all kinds of things to mice that you wouldn't want to do to humans. For a start you can castrate them. You can then dissociate the effect of the XY genotype from the effect of circulating hormones. When this is done, many of the sex differences in gene expression disappear, confirming the importance of hormones.
There's some evidence, though, that this isn't the whole story. For a start, it is possible to find genes that are differently expressed in males and females very early in development, before the sex organs are formed. These differences can't be due to circulating hormones. You can go further and create genetically modified mice in which chromosome status and biological sex are dissociated.  For instance, if Sry (the mouse version of SRY) is deleted from the Y chromosome, you end up with a biologically female mouse with XY chromosome constitution. Or an autosomal Sry transgene can be added to a female to give a male mouse with XX constitution. A recent study using this approach showed that there are hundreds of mouse genes that are differently expressed in normal XX females vs. XY females, or in normal XY males vs. XX males. For these genes, there seems to be a direct effect of the  X or Y chromosome on gene expression, which isn't due to hormonal differences in males and females.

Wijchers and Festenstein consider four possible mechanisms for such effects.
1. SRY has long been known to be important for development of testes, but that does not rule out a direct role of this gene in influencing development of other organs. An in mice there is indeed some evidence for a direct effect of Sry on neuronal development.
2. Imprinting of genes on the X chromosome. This is where it starts to get really complicated. We have already noted how genes on the X chromosome can be inactivated. I've told you that X-inactivation occurs at random, as illustrated by the calico cat. However, there's a mechanism known as imprinting whereby expression of a gene depends on whether the gene is inherited from the father or the mother. Imprinting was originally described for genes on the autosomes, but there's considerable interest in the idea of imprinting affecting genes on the X chromosome, as this could lead to sex differences. The easiest way to explain this is by a mouse experiment. It's possible to make a genetically modified mouse with a single X chromosome. The interest is then in whether the single X chromosome comes from the mother or the father. And indeed, there's growing evidence for differences in brain development and cognitive function between  genetically modified mice with a single maternal or paternal X chromosome: i.e., evidence of imprinting. Now this has implications for sex differences in normal, unmodified mice. XY male mice have just one X chromosome, which always comes from the mother, and will always be expressed. But XX female mice have a mixture of active maternal and paternal X-chromosomes. Any effect that is specific to a paternally-derived X-chromosome will therefore only be seen in females.
What about humans? Here we can study girls with Turner syndrome, a condition in which there is one rather than two X chromosomes. Skuse and colleagues found differences in cognition, especially social functioning between girls with a single maternal X vs. those with a single paternal X. There are few studies of this kind, because it is difficult to recruit large enough samples, so the results need replicating. But potentially this finding has tremendous implications, not just for finding out about Turner syndrome itself, but for understanding sex differences in development and disorders of social cognition.
3. Although most X-chromosome genes are expressed from only one X-chromosome, as noted above, some genes escape inactivation, and for these genes females have two active copies. In the main, these are genes with a homologue on the Y-chromosome, but there are exceptions, and in such cases females have twice the dosage of gene product compared to males (see Figure 1). And even where there is a homologue gene on the Y chromosome, this may have different effects from the active X-chromosome gene.
4. The Y chromosome contains a lot of inactive DNA with no genes. Recent studies on fruit flies has found that this inactive DNA can affect expression of genes on the autosomes, by affecting availability in the cell nucleus of factors that are important for gene expression or repression. It's not clear if this applies to humans.

What are the implications of this research for the debate about sex differences in everyday human behaviour? This was very much in the news in 2010 with the publication of Cordelia Fine’s book Delusions of Gender, which was reviewed in The Psychologist, with a reply by Simon Baron-Cohen. Fine focused on two key issues: first, she questioned the standards of evidence used by those claiming biologically-based sex differences in behaviour, and second she noted how there were powerful cultural factors that affected gender-specific behaviour and that were all too often disregarded by those promoting what she termed ‘neurosexism’. I don’t know the literature well enough to evaluate the first point, but on the second, I would agree with Fine that biological factors do not occur in a vacuum. The evidence I’ve reviewed on genes shows unequivocally that there are sex differences in gene expression, but it does not exclude a role for experience and culture. This is nicely illustrated by the research of Michael Meaney and his colleagues demonstrating that gene expression in rats and mice can be influenced by maternal licking of their offspring, and that this in turn may differ for male and female pups!  Genes are complex and fascinating in their effects, but they are not destiny.