Reproducibility and phonics: necessary but not sufficient

Over a hotel breakfast at an unfeasibly early hour (I'm a clock mutant) I saw two things on Twitter that appeared totally unrelated but which captured my interest for similar reasons.

The two topics were the phonics wars and the reproducibility crisis. For those of you who don't work on children's reading, the idea of phonics wars may seem weid. But sadly, there we have it: those in charge of the education of young minds locked in battle over how to teach children to read. Andrew Old (@oldandrewuk), an exasperated teacher, sounded off this week about 'phonics denialists', who are vehemently opposed to phonics instrution, despite a mountain of evidence indicating this is an important aspect of teaching children to read. He analysed three particular arguments used to defend an anti-phonics stance. I won't summarise the whole piece, as you can read what Andrew says in his blogpost. Rather, I just want to note one of the points that struck a chord with me. It's the argument that 'There's more to phonics than just decoding'. As Andrew points out, those who say this want to imply that those who teach phonics don't want to do anything else.


'In this fantasy, phonics denialists are the only people saving children from 8 hours a day, sat in rows, being drilled in learning letter combinations from a chalkboard while being banned from seeing a book or an illustration.'

This is nonsense: see, for instance, this interview with my colleague Kate Nation, who explains how phonics knowledge is necessary but not sufficient for competent reading.

So what has this got to do with reproducibility in science? Well, another of my favourite colleagues, Dick Passingham, started a little discussion on Twitter - in response to a tweet about a Radiolab piece on replication. Dick is someone I enjoy listening to because he is a fount of intelligence and common sense, but on this occasion, what he said made me a tad irritated: 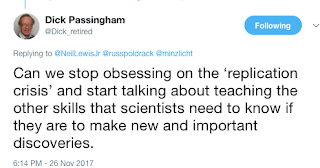 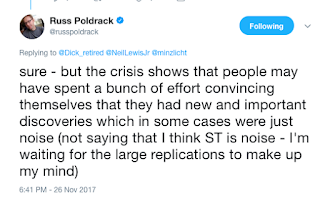 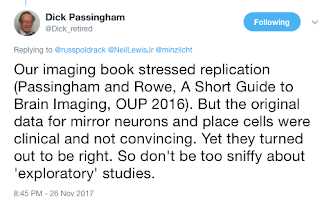 This has elements of the 'more to phonics than just decoding' style of argument. Of course scientists need to know more than how to make their research reproducible. They need to be able to explore, to develop new theories and to see how to interpret the unexpected. But it really isn't an either/or. Just as phonics is necessary but not sufficient for learning to read, so are reproducible practices necessary but not sufficient for doing good science. Just as phonics denialists depicts phonics advocates as turning children into bored zombies who hate books, those trying to fix reproducibility problems are portrayed as wanting to suppress creative geniuses and turn the process of doing research into a tedious and mechanical exercise. The winds of change that are blowing through psychology won't stop researchers being creative, but they will force them to test their ideas more rigorously before going public.

For those, like Dick, who was trained to do rigorous science from the outset, the focus on reproducibiity may seem like a distraction from the important stuff. But the incentive structure has changed dramatically in recent decades with the rewards favouring the over-hyped sensational result over the careful, thoughful science that he favours. The result is an enormous amount of waste - of resources, of time and careers. So I'm not going to stop 'obsessing about the reproducibility crisis.' As I replied rather sourly to Dick: 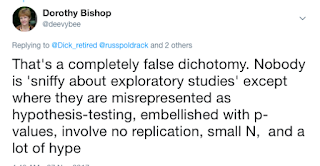